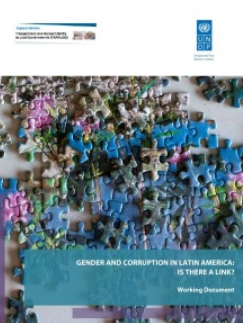 The analysis of the connection between gender and corruption is still very incipient in our region, and this is why from UNDP´s Regional Centre of the Regional Bureau for Latin America and the Caribbean, through its democratic governance and gender areas, has promoted the development of this working document on corruption and gender.

The objective of this working document is to review the existing production on the topic, how some ideas and myths were approached in current studies and to question with new evidence some premises that have been installed in the collective perception. One example: women by nature are less corruptible than men, and thus when they are more women in decision making positions there is less corruption. These types of essentialist approaches are reflected in in some policy response in the region with strategies to increase women in institutions. Although beneficial in the short-term in terms of parity and democracy, long-term it could have counterproductive effects if expectative is raise to end corruption with women (and “their incorruptible nature)” without focusing on those factors that promote corruption and trigger it.