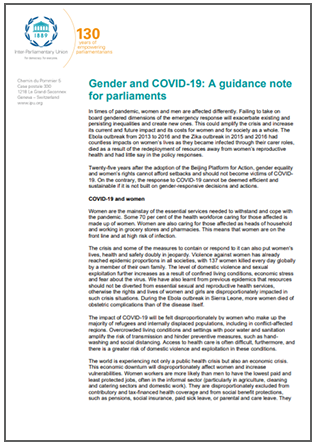 In times of pandemic, women and men are affected differently. Failing to take on board gendered dimensions of the emergency response will exacerbate existing and persisting inequalities and create new ones. This could amplify the crisis and increase its current and future impact and its costs for women and for society as a whole. The Ebola outbreak from 2013 to 2016 and the Zika outbreak in 2015 and 2016 had countless impacts on women’s lives as they became infected through their carer roles, died as a result of the redeployment o f resources away from women’s reproductive health and had little say in the policy responses.